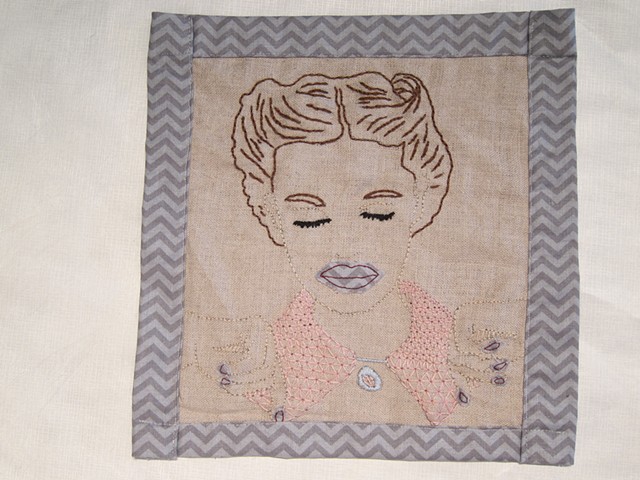 In a world full of images as slick and fast as they come, Kala Istvanek has chosen to do something deeply counter-intuitive and potentially resistant. Working from pictures found in magazines or on Pinterest.com, she painstakingly reproduces their subjects using fabric and thread. No surprise that a pair of these take beautiful women as their focus; some surprise, and meaning, perhaps in the sadness apparent in the ladies’ downcast eyes and straight-set lips. To call Istvanek’s artworks reproductions is a bit of a misnomer, however; they are more accurately selective translations, and like all translations, evidence both loss and gain at the level of detail. Realistic information is impossible to achieve via embroidery, of course, but that’s part of the point. What replaces it is a sense of labor and care rarely evident in the kind of advertising and editorial imagery that is Istvanek’s source material. The depicted women themselves remain disturbingly superficial; by contrast, their new maker—Istvanek—asserts her own abilities and identity in a way that anonymous photographers, makeup artists, and various others behind the production of the original image cannot.