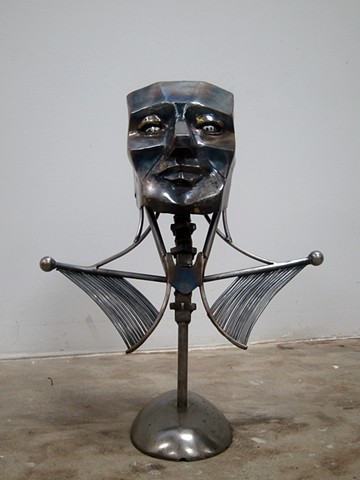 According to Greek mythology, Prometheus was a demigod beloved of craftsmen. When Zeus hid fire from humankind, Prometheus stole it back, only to be terribly punished. Manny Lopez uses 28 separate plates of steel to honor him with a proud, gleaming bust that owes its structure and iridescent sheen to fire. Lopez has forged forms like a trio of owls and a model bicycle from scrap metal parts, and there’s plenty of wit in his inventive reuse of horseshoes and cog wheels, but it’s “Prometheus” where material, method and subject truly come together. With vertebrae crafted from inside-out pipe and shoulder blades from a barbecue grill, Prometheus proves himself the continued patron of those artists, like Lopez, who make sculpture from fire.