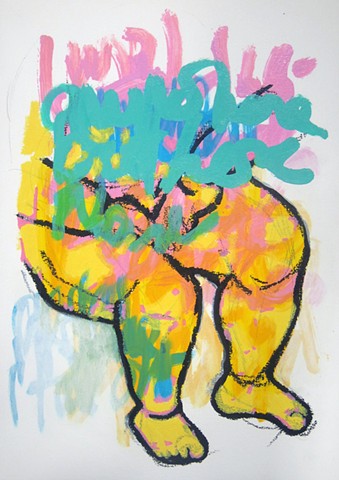 "Written on the Body” is a 1993 novel by the British author Jeanette Winterson. It could also be the title for a series of drawings by Tisch Mikhail Lewis, in which the artist graffities across hefty, colorful paintings of her own body. The words she writes, like those of many street artists, can be hard to decipher. As with a lot of street art, it doesn’t much matter. Lewis’s words aren’t there primarily for reading, they are there to claim space. She lifts them on strong broad shoulders, settles them on her wide tawny lap, wears them like decoration around a soft bicep. Those words can be thick and turquoise, or hot pink and skinny. They’re pretty and well designed. Their weight on her body varies according to their number and scale, but the metaphoric effect remains the same: here is a body on which much has been written, by any number of people, situations, dialogues, politics and histories. It is a body that can take it. And it is a body that deserves to be read, but only once it can write its very own story.