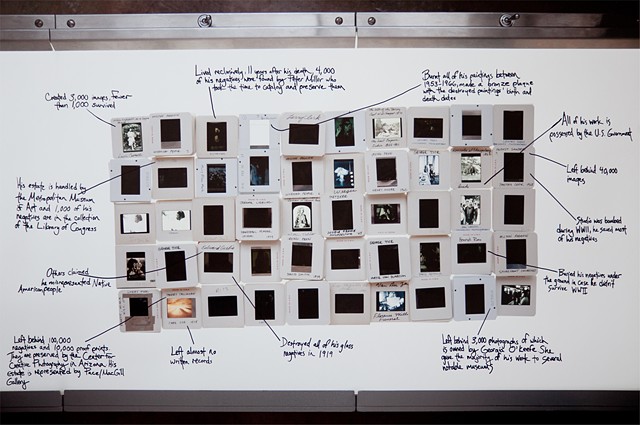 Throughout the course of the 20th century and into the 21st, human beings have used an ever-changing array of media to record their knowledge of the world around them. It goes back much further than that, of course, to the painters in Lascaux who used berry pigments and ground minerals to stain the walls. iPhone owners didn’t invent the recording device. Sarah Nesbitt tracks these technologies as they are superseded by others, and as their veracity as factual documents comes increasingly into question. She weighs excised bits of journals and newspapers, annotates slide collections, and erases the pages of an encyclopedic book. Seen through an augmented reality app in a smartphone device, a double-page spread on the story of the telephone in Henry Chase Hill’s 1917 “Universal Book of Knowledge and Wonders” dissolves into a pile of eraser rubbings. Technology made the book possible, and the telephone, and the book about the telephone, and the smartphone into which it all disappeared. The French term for this situation is mise en abyme, and that about says it: into the abyss we go. It isn’t technology that gets us there, it’s certain kinds of critical knowledge.