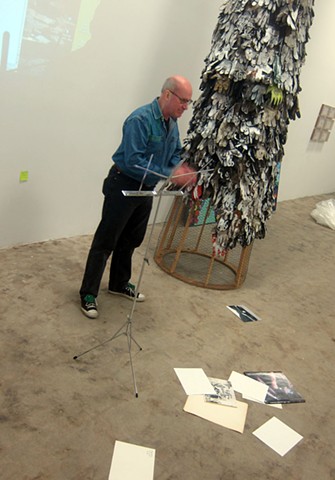 An ambitious artwork has relevance beyond the artist who created it. Drew performs a vaudevillian act that resonates, despite being titled “Me” and being entirely comprised of documents of his 58 years of life, which he theatrically displays and tosses to the ground. But first, a little bit about that me: Midwestern, sat for black-and-white baby portraits, went to school with other kids, listened to Lou Reed, built and raced and wrecked cars. Lou Reed and the cars continue to appeal, the cars especially, which can go up to 135 mph on the local speedway. Subsequent questioning reveals Drew to be the leader of a fake racing team whose name, in Italian, means Blank Meatball. Further inquiry would no doubt unearth a trove of other facts and favorites, and if the above are any indication, they’d be some combination of banal and eccentric. That’s what’s bigger than Drew himself: that the unassuming baby in the Sears portrait can one day invent Blank Meatballs. Crumple that, it goes far.