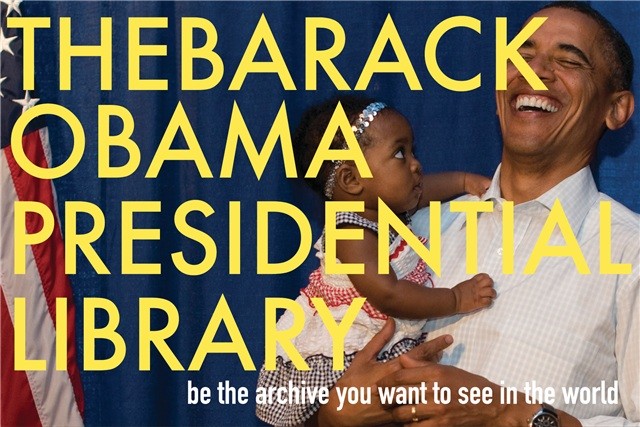 The Barack Obama Presidential Library offers a radical reinvention of the historical repository. Located in Hyde Park and filled with submissions of artworks, documents and artifacts by the general public, plus educational placards authored by the people, the Library tells a complex, critical and multi-authored story of the 44th President’s tenure as leader of the United States of America. Sound incredible? It is. It is also an artwork by Jorge Lucero, meant to be confused with the Barack Obama Presidential Center, the official repository for the 44th POTUS’s papers, records and collections. What do these two institutions have in common, apart from their presidential subject and location on the South Side of Chicago? Not much, unfortunately. Presidential Libraries, like most official institutions, have the job of telling history from the victor’s singular and limited point of view, as if that were the whole story. But such is the promise of art, made manifest in Lucero’s Library—to provide a space in which the world we want, one of multiple histories and points of view, can be momentarily envisioned as reality.