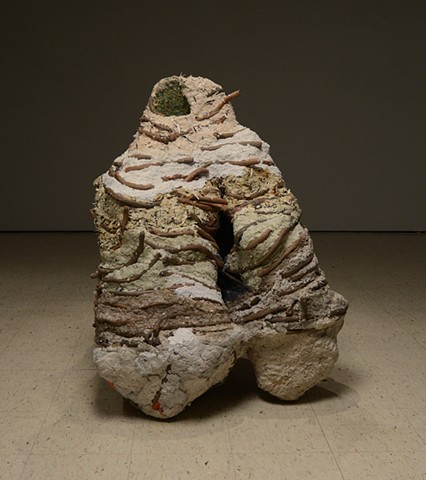 Agnostics admit that they have no idea what human afterlife will hold: maybe something, maybe nothing. Stephen Ramberg need not locate themself in such limbo. A sculptor, their primary material is donated paper goods—documents, old letters, books, statements—that achieve a new life after being pulped and formed into large, bulbous shapes held together by ribs of ceramic coil. Man-made objects are born and live a life that eventually ends; recycling posits a second life that in oblique ways regenerates what energy is left over from that first time around. Echoes of samsara, the Hindu and Buddhist belief in the endless cycle of death and rebirth, rebound throughout Ramberg’s sculptures, as they do in the works of famed recycled-materials artists like Theaster Gates or John Preus. Ramberg’s gambit is an earthier one, however, resulting here in a form that could have been built by wasps or burrowed by moles. That’s part of the lesson of rebirth: you might come back as an ant, so watch where you step.