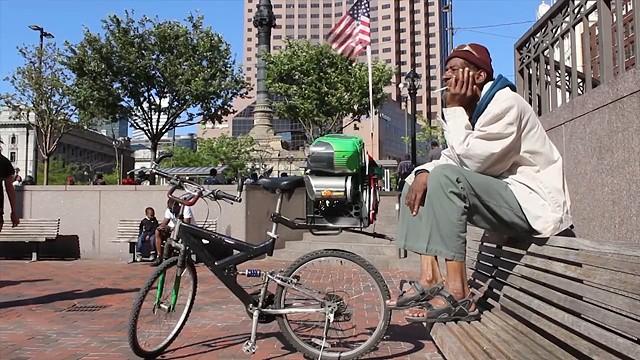 In a collaboration with the poet Rafique Washington, Tony Yanick and Adrian Alecu produced a drifting documentary about contemporary Cleveland, complete with empty lots, gentrifying parcels of downtown, black street preachers, abandoned buildings, and oblivious white wedding-goers. In their segment of “The Fixers” (a larger series produced by Kate Sopko), Yanick and filmmaker Robert Banks, Jr. portrayed the young black activist Naudia Loftis and her family and friends in the Kinsman neighborhood, where too many black kids are getting killed. “Regretfully Yours, K” feels like something else entirely, a filmed theatricalization of the writer Franz Kafka’s deep anxieties and romantic correspondence. Today, however, with the recent presidential win of Donald Trump and the related rise of the far right, it all comes horribly together. Milena Jesenská, a woman with whom Kafka exchanged letters, died in a Nazi concentration camp. This country just elected its Hitler. Cleveland isn’t going to get any better. It’s all going to get far, far worse. Yanick had the eerie prescience to make films about it ahead of time.