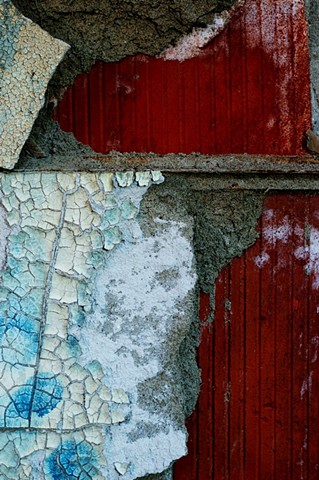 Peeling paint, broken bricks, graffitied walls, and overgrowth may not seem like obvious elements for a series of beautiful photographs, but in Kari Achatz’s “Disremembered” they amount to just that. Buffalo’s long-abandoned Central Terminal Station, an Art Deco masterpiece out of use since the mid-1950s, serves as subject in Achatz’s three-part study. Close-ups reveal walls mysteriously punctured or textured like colorful animal skins; black-and-white long shots set the desolate scene. The ruin, a stable photographic category established by masters like Robert Polidori, holds many attractions. First it offers a critique of architectural abandon, whether due to the vagaries of capitalism and progress or to environmental disaster. Second comes appreciation, not a cynical love of destruction itself but rather of what the late Leonard Cohen once described in song: There is a crack in everything / That’s how the light gets in.