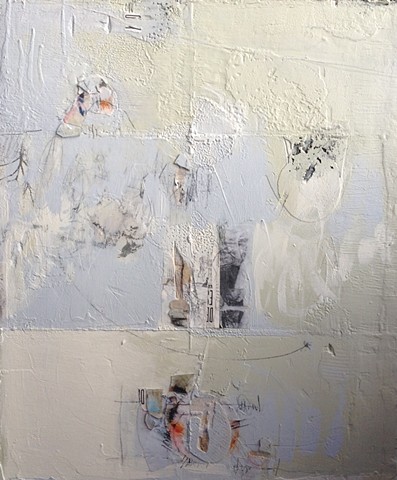 In Paris in the 1950s, a small group of artists calling themselves the Affichistes made a practice of wandering the city to find their paintings on its walls. When they liked a swatch of torn and layered posters, they sliced it down and rehung it in a gallery. Fast forward many decades later and here is Joyce Hill, laboring not with her feet on the street but her hands in the studio to create heavily worked collages that look and feel a lot like those the Affichistes discovered by hazard. Her work resembles, too, some of the best American experiments of that era: the rough, spare graffiti of Cy Twombly and the rebus-like combines of Robert Rauschenberg. All of these artists have been enamored of the urban environment and the beauty that could be wrought from its accretions both intentionally and not. Not every denizen of the city can see it for the unique aesthetics it contains; then as now, we need artists like Hill to set an example.