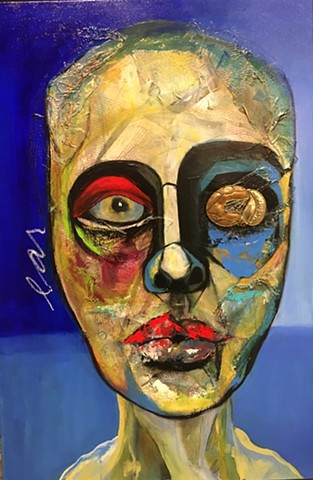 Pareidolia is a phenomenon whereby a person sees a known shape in something unrelated, as when we find dragons in the clouds or hike out to view the old man in the mountain. It’s a helpful tendency for an artist to have, as well as a viewer. Cathy Williams has it in spades and, luckily, I’ve got a bit of it too. The scratchy acid green, magenta, grey and white miasma from which a deep black form emerges in “26.2,” a large acrylic painting by the former marathoner, looks just as much to me like an adrenaline-fueled runner hurtling against a territory as it does to her. Faces and bodies emerge in other paintings too, all of which Williams begins improvisationally, collaging this and painting that, until some form appears, demanding definition. This can be a piano man, a party girl or, as in “Imperius Prima,” the head of a woman so striking, so harshly colored, so hard edged as to seem at least part automaton, a quality enhanced by the copper belt buckle that replaces her left eye. Williams’s ability with found objects could be a kind of pareidolia, too, to keep some random scrap around for decades (she wore the belt in question in the 70s) until it finally revealed the other thing it was meant to be.