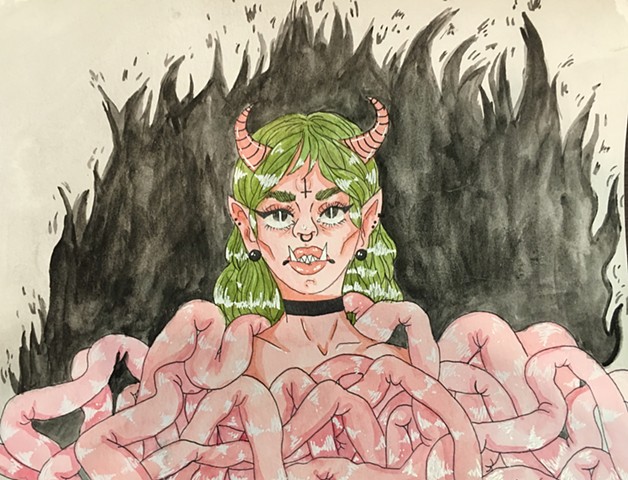 Alex Wilcher is the illustrator of a series of precisely drafted watercolors featuring girls who could be Margaret Keane’s famous big-eyed waifs all grown up and gone off to high school. In addition to their enormous, long-lashed peepers, Wilcher’s girls have got full lips and lush hair, a penchant for scented candles and sunflowers, and, like the story of Keane herself, a sense that something’s wrong in paradise. Keane’s characters, who achieved great commercial success starting in the 1960s, were originally attributed to her husband, who took credit for their creation and later lost that claim in a courtroom paint-off. Wilcher, meanwhile, paints some of her girls as if everything’s okay in the land of being gorgeous, young and carefree, then lets others cry it out into the flower-strewn bathwater, swarm with death’s head moths, and go fully inferno with green hair, horns, fangs and an outfit that could best be described as intestinal. Which one most truly exemplifies the state of being a high-school girl in midwestern America today, as is Wilcher herself? It could be a combination of them all.