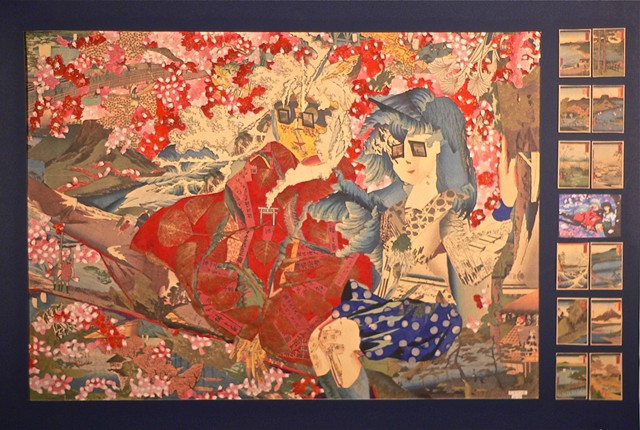 What to do with all the things that expire? Wall calendars after December 31 (insert year), parking passes, presidents… Suzanne K. Merrell, an inveterate collagist, has found a solution. She cuts them all up into tiny bits—which must be more or less cathartic, depending on the material—and refashions them into new compositions that reference but also comedically depart from the original. She’s done this with more than a few artsy calendars, including one of Michelangelo, which allowed her to produce a many-armed nude creature that would rival the goddess Kali, and another of Hiroshige, which resulted in the scene of a hip anime couple sitting up a blossoming cherry tree. The latter is my fave because the latter is my fave, even when sliced up into shards. Michelangelo just doesn’t do it for me because he never has. For “Playing with Matches,” Merrell took dozens of Diamond Brand king-sized matchbooks emblazoned with George W. Bush’s face (who knew there was a Presidential Series?) and created a larger-than-life-size portrait of a grim-faced W., his hair the dull brown of individual matches, his skin a horrid shade of matchbook-cover red, the whole of it threatening to burn up in a haze of sulphur. If only.