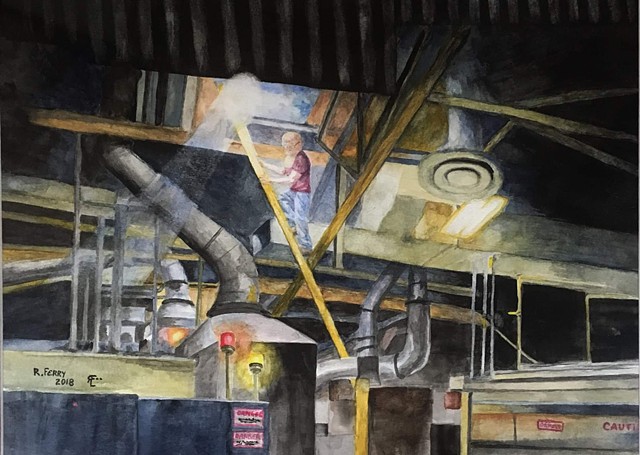 The array of subjects pictured in the watercolors, ink drawings and acrylics of Ronald Ferry aren’t all an obvious match. What have Native Americans, a snarling snake, an old man in a wheelchair, and two tough guys playing chess got in common? Likewise, a bear and a hunter up in the mountains, a beautiful woman with a European castle behind her, a covered bridge and a child gazing out a window at the garden? What they have in common is Ferry himself, in the obvious sense that he is the artist who made these pictures, but more meaningfully in that he felt compelled to make them. The scenes are constructed out of Ferry’s life and loves: an affection for the natural world, an admiration for Native American lore, an appreciation for rural Indiana roads and buildings, an instinct to place models in front of picturesque backgrounds. For decades Ferry worked in a factory that makes truck and tank transmissions; many of his models, male and female, were colleagues there, whilst others provided photographs he painted with their permission. Ferry recently retired from this employ; no doubt plenty more pictures are on their way, many of which will hopefully be like the two complex self-portraits featured here, one escaping the factory, the other at work in his barn-cum-house-cum-studio. What they lose in terms of the picturesque, they gain in reflexivity.