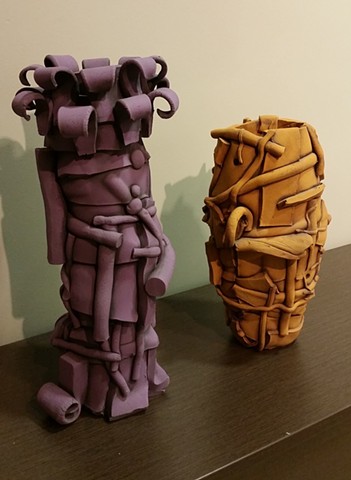 If the future turned out to resemble the streamlined, Deco-fabulous world imagined in “Metropolis,” the 1927 silent movie, only instead of everything being made of sleek metal it were made of mauve, turquoise and ocher-hued terra cotta, and if that future eventually fell to catastrophic ruins, losing all of its shininess and terrifying order, its remains might look something like Jeff Dalton’s sculptures. Dalton agglomerates his vessels primarily out of extruded clay: round or squared, long or short, flattened or curled. Pieces get flung on, carefully placed, built up. If these feel like the bits and pieces of a lost society, of its architecture, its infrastructure and its decorative arts, the reference isn’t just my old-cinema-saturated imagination—Dalton is interested in the idea of refuse, in multiple senses of the word: the things thrown aside but also the reluctance to accept conventional methods. Let’s hope he’s still around in a few years when our own civilization falls to pieces: at least there will be someone to put its remains together in a strikingly moving fashion.