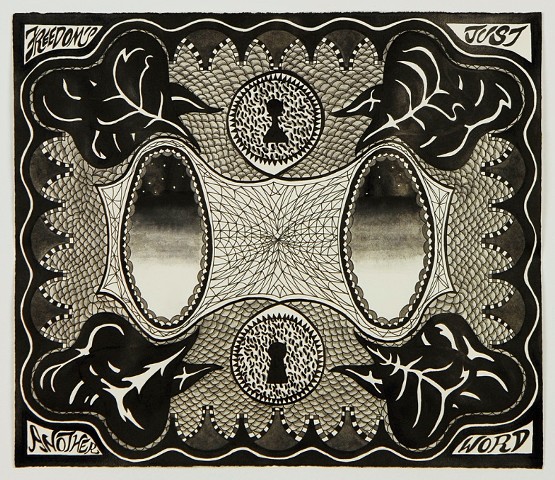 The two artworks Michael Aaron Lee was meant to have on view in a museum show in Chonqing, China, now indefinitely postponed, defy categorization. They flirt with being low-relief sculptures, combine multiple decorative schemes, and suggest that they might be frames, though frames that frame only themselves. The effect is one of self-contained obsessiveness, as expressed by meticulously layered constructions of paper and wood tinted an eerie almost-black through an edge-to-edge application of graphite. Lee’s recent exhibition schedule has instead consisted of Quarantine Folk, online in June and July at the Brooklyn gallery Calico, which included three new drawings from his Americana series. To create the monochromatic pencil and ink pictures, Lee intricately arranges scraps of text from folk songs and popular slogans with images from dusty attics and old-timey prints into unsettlingly dense and dark compositions perfect for right now. Begun in 2017, the suite is as fraught as its name, though it isn’t exactly prescient. This is exactly where we’ve been headed all along. Lee, to his credit, appears to have seen it coming.