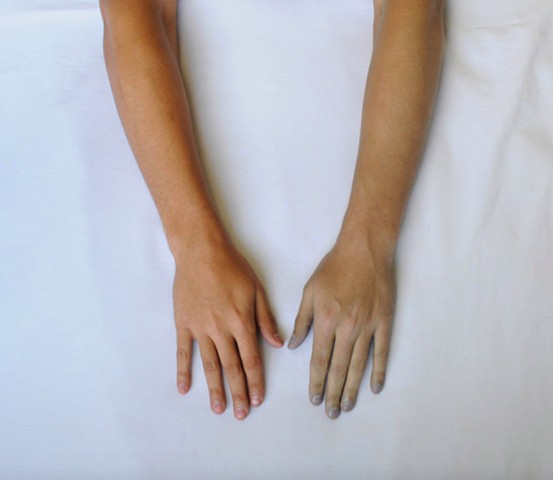 Is everything meaningless? Has it all been done before? These perennial questions emerge in Carlos Salazar-Lermont’s solo exhibition at Chuquimarca Projects in Chicago, Ecclesiastés 1:2, named for the corresponding biblical passage. The Venezuelan artist presents the remains of a half-dozen performances in which he uses his own body to probe between life and death, symbolism and reality, permanence and ephemerality. “Rigor Mortis,” a photograph of his arms, reveals one to be in rosy health, the other worryingly, but temporarily, blue and limp from a tourniquet. In “Memento Mori/Vanitas,” Salazar-Lermont inklessly tattooed those portentous words across his torso and back, recording their eventual disappearance as his skin healed; for a reprise, Instagrammed live last week, his chest was imprinted with Ecclesiastes 1:9, essentially repeating the message. Though fiercely unsettling, some comfort can be drawn from these gestures, even—perhaps especially—those in the two-channel video “ICHTHYS II.” There Salazar-Lermont forcefully jabs his finger into a dead fish and into his own torso, damaging both but ultimately confirming the resilience of the living human body. (Curated by Wil Ruggiero.)