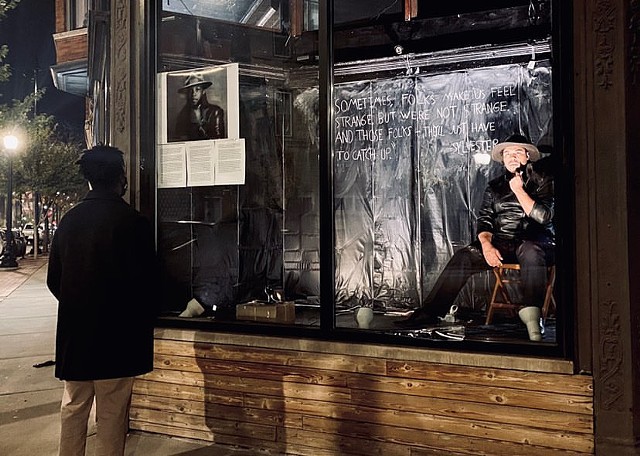 Humans are hard-wired for figurative visual language. A real person, enmeshed in a compelling story, gets us every time. That’s important for movie directors to know, but also historians, social justice reformers, basically anyone who cares deeply about imparting information and creating change. Body/Space, Anthony Sims’s October-November performance series at Chicago’s Co-Prosperity Sphere, provided plenty such opportunities for passersby on each of the 26 evenings that he created tableaux vivants in the gallery’s enormous storefront windows. There Sims posed as poet Langston Hughes, choreographer Alvin Ailey, and writer James Baldwin, as well as lesser-known black queer figures like gay liberation activist Marsha P. Johnson and vogue queen Willi Ninja. Against blackboard-like backdrops across which he scrawled rousing quotes from his subjects—Baldwin’s “People are trapped in history and history is trapped in them” could be the project’s epigraph—Sims positioned himself in costumes and with props based on iconic photographs, allowing them to come uncannily alive for two hours each night. There is much to be learned from abstract theorizing and statistical analysis, but it is embodiment that most readily equals empathy.