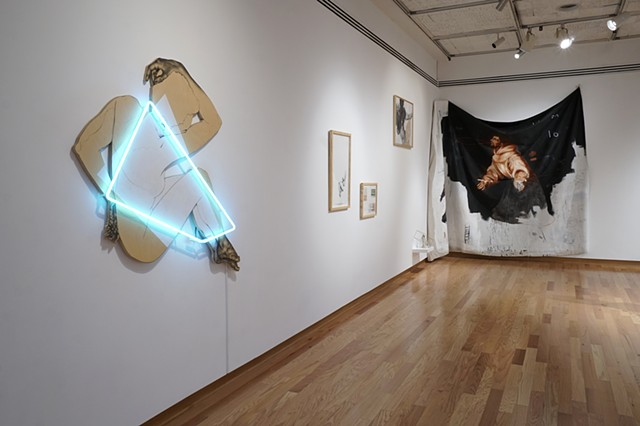 EMPTINESS IS FORM
< previous next >

Madness and abuse are as poorly understood as they are represented in modern Western culture, a hole that Megan Sterling and Matt Bodett begin to fill in this collaborative exhibition. On limited view at Rockford State University in Illinois this past fall, Emptiness is Form, tenderly installed with dozens of overlapping sculptures, drawings, wall hangings and paintings, tries hard to find visual languages for expressing embodied trauma, hallucination, depression, and states of healing. In an enormous hyperrealistically drawn scene composed of cut-outs, Sterling places three large flat stones above the body forced to always bear their weight, a body nearly obliterated by the assault they symbolize, a body whose grasping arms are its only visible part. The irreconcilability of styles in Bodett’s sampling of Leonardo’s “Last Supper” and other Renaissance religious painting and sculpture—think sacred naturalism versus profane graffiti—signals the gulf in how individuals possessed by powerful visions were treated in two radically different times. Museums and churches hold the glorious evidence of then; as for now, look down a dark alley to find Jesus and Saint Francis and their disciples, or else check the line at the pharmacy counter.