Erika Råberg
Has life become just a giant shiny surface in which to see ourselves reflected right back at us? You have to wonder. Mirror State, a short video by Erika Råberg that is part of a larger online interdisciplinary project by the same name, offers the opportunity to muse on this question both in the obvious terms of social media and the subtler ones of the Anthropocene. Set at the Bonneville Salt Flats in Utah and employing as actors a few clusters of unsuspecting tourists, “Mirror State” frames this wondrous landscape so that the horizon acts as a line separating the sky from its likeness, as imaged by the crystalline surface of the dried ancient lakebed. The humans, alas, are too busy posing for one another’s cameras to notice the strange coincidence between what the atmosphere and the earth are doing—image making—and the practice in which they themselves are engaged. Or the more unsettling fact that the primary human technological incursion into this environment is not the smartphone they’re holding but the bomb tests of the recent past. Or the far more profound, even unmanageable notion that in a place so old, neither bombs nor cellphones will ultimately amount to more than a blip in time. 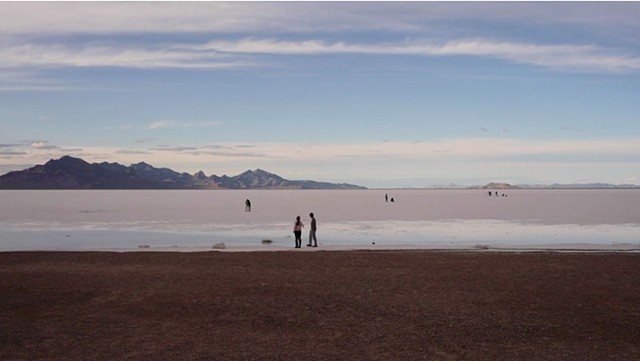