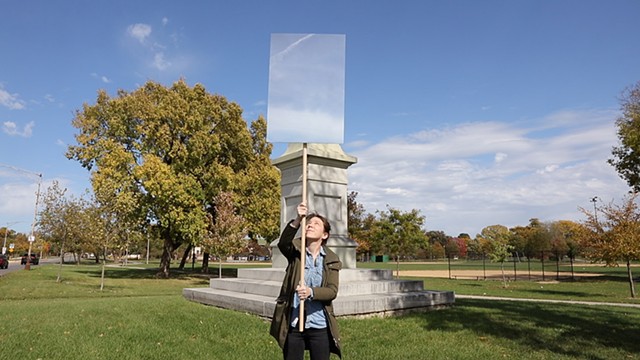 What to do with all those monuments littering city parks and plazas in the form of dead white men, some of them still great, most of them now understood as beholden to racist and sexist ideologies? With a nod to the old-school darkroom technique called dodging, Kelly Kristin Jones holds placards in front of some of the more egregious of these sculptures in order to temporarily erase them in videos and photographs shot from just the right angle. For in time and paradise, a fall solo show at the Riverside Arts Center organized to coincide with the 100th anniversary of the 19th Amendment, she built 19 such tools out of variably sized pictures of the sky, one for each of 19 women who fought and organized for the rights of all women, not just the wealthy white ladies who were the primary beneficiaries of the ratification. Among those 19 women were organizers, publishers and journalists, photographers and marchers. In the spirit of the latter, Kristin Jones occasionally took those individual cloud sticks out for a walk, to protest Chicago’s many troubling statues and take their rightful (if brief) place atop those grand stone pedestals.