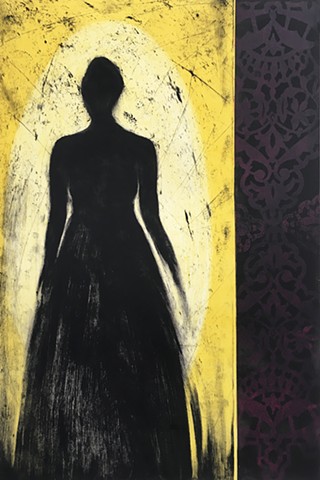 Figurative and abstract are meant to be antonyms, but they aren’t always. In Return to the Figure, a solo show at Casa Haas in Mazatlán, Mexico, closed shortly after it opened in March 2020 due to the pandemic, Glen Rogers exhibited monoprints and oils from four recent series centered on timeless female forms. Shadowy silhouettes ornamented with wings, auras and patterning, they glow with the colors and textures of other times and places. Some are named for the Black Madonna and Lilith, those underappreciated and misunderstood women of Christian legend, some belong to the series “Her Story,” and thus stand for all women. Real individuals are not in question anywhere here. What’s at stake, rather, is an abstract notion of Woman, not actually so different from the traditionally female symbols and motifs that were the focus of the self-described abstractions Rogers had spent the past two decades making. Be it a woman, a flower or a yoni, it’s all conceptionally female.