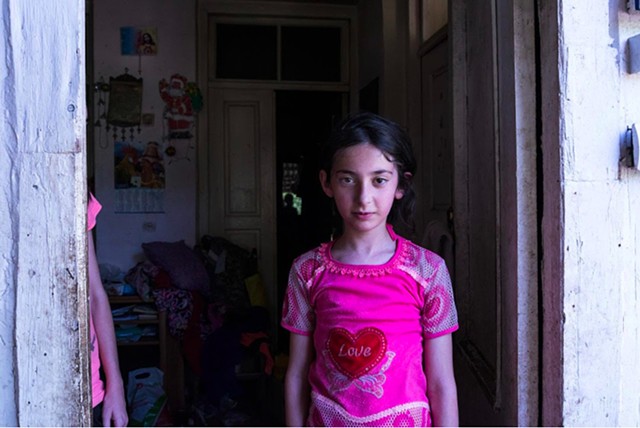 In a world overrun with obscure political conflicts that wreak unjust havoc on the lives of civilians, Kristin Anahit Cass bears witness in two series of photographs currently on view online at the Stamelos Gallery Center of the University of Michigan-Dearborn. An American lawyer whose family fled the 1915 Armenian Genocide, Cass has since 2015 traveled through the villages of Tavush, an Armenian province along the Azerbaijani border, documenting lives eked out under quotidian threat of sniper fire: children who study in a kindergarten where the window in the music room was shot out; homes with bullet holes in bathrooms, dining rooms, nurseries; abandoned factories where Armenians and Azeris used to work together. The portraits, of both people and places, are composed with a tender straightforwardness that befits each particular subject. Instead of the aestheticized ruins of disaster porn, moments of human resilience shine through alongside the trauma: the pride of a teenage girl sharpshooter, the bright colors and patterns of domestic textiles, a hospitable table full of homegrown fruits and handmade pastries. It’s a tenuous life rendered tragically more vulnerable this past September, with the Second Nagorno-Karabakh War and its continued aftermath.