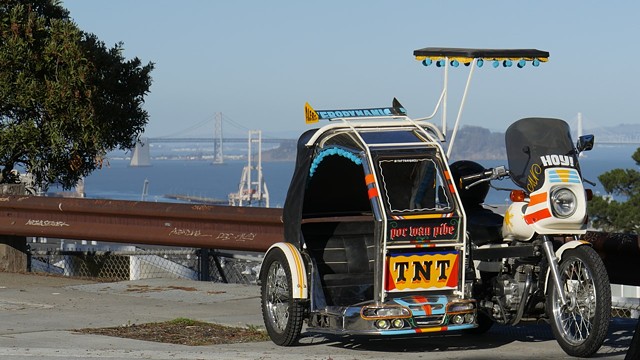 A PLACE BEYOND
< previous next >

Whether or not capitalism is intrinsically unjust, its outcomes too often are. Alternative models of exchange warrant increased attention, including the sort that would have been provided by A Place Beyond, a summer exhibition at San Francisco’s Yerba Buena Center for the Arts that was unfortunately cancelled due to the pandemic. Curated by MUZ Collective, the group show planned to feature, among others, Natani Notah’s attempts to stop the never-ending exploitation of Sacagawea by relying on audience donation to remove coins bearing her likeness from circulation; the Bureau of Linguistical Reality’s workshop dedicated to developing much-needed new words for a post-capital economy; and Victor Yañez-Lazcano’s ennobling, attractive assemblages of the tools of undervalued labor, like discarded broom handles and shovels. Projects envisioned beyond the walls of the museum included Paolo Asuncion and Michael Arcega’s "TNT Traysikel," a flashy motorcycle-with-sidecar reminiscent of the auto rickshaws of the Philippines. The price for a trip around town? Stories of immigration from willing riders, no doubt propelled by the irresistible combination of nostalgia plus a free ride.