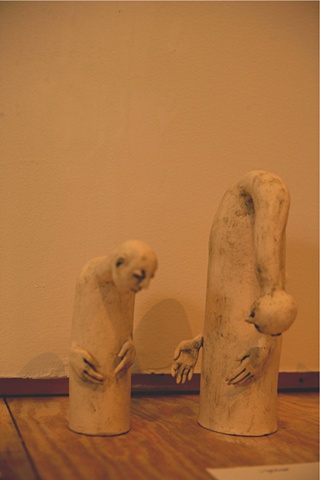 In the hands of the artist, clay has every possibility and freedom of form, at least until dried, glazed, and fired. Likewise pen and paper, meeting under the creator’s touch, bespeak a world of possibility arrested only by the decision to put cap back on pen. How paradoxical, then, is the work of Megan Ramsey, who in these two media creates representations of the most beleaguered of souls: heads and hands imprisoned in planes and tubes, dangling from the ends of spineless, elongated necks, manipulated by the overbearing palm of a godly puppeteer. These “people” clearly recognize their awful lot, wearing their discomfort and sorrow plain on their faces. It’s a bleak fate uniquely and curiously tempered in Ramsey’s sketch of a deer with a human face. Underneath big, beautiful antlers, this hybrid creature manages something none of the artist’s other characters seem capable of: smiling.