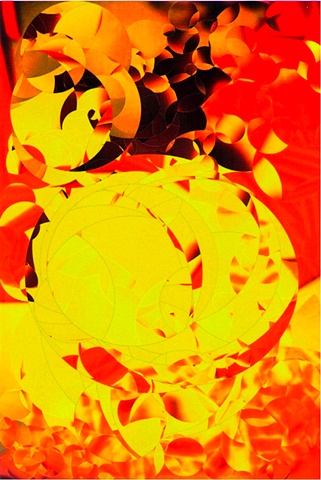 The body of work collaboratively generated by painter Hans Schmitt Matzen and photographer Gieves Anderson acts as a systematic, back-and-forth dialogue meant to stimulate the creation of artwork through feedback loops and sampling, not unlike the means by which much contemporary music is created. But music is not their thematic, rather the history of art is, or at least the very post-structuralist way that they perceive art to have been made over time, in terms of every work being inextricably tied to all the works that came before it. What’s notable about their focus is that they tackle it not via the themes, images or styles passed along from one artist to another but rather in terms of influence as such. Hence the visible surface of their prints does not directly represent their subject—though the depicted liquid ebbs, ivy tangles, hexagonal floor tiles, and architectural spaces are certainly legible—but rather one that must be teased out in between the lines or, rather, inside the loopholes created across the meta-artwork they’ve so aptly titled "The Loop Project."