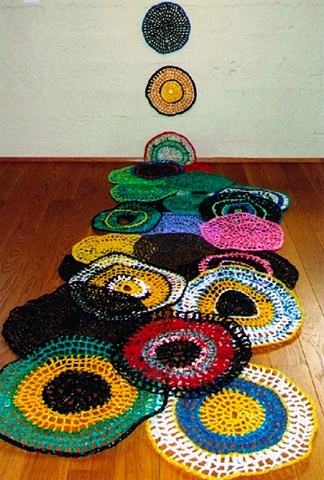 Patricia Tinajero’s pretty macramé doilies are not some leftover hippie decorations from the 1970s. They might seem so with their happy pinks and greens, their vibrant yellows and blues, but look closer at the source of their shininess: plastic bags. Woven from that most ubiquitous marker of our cheap, disposable culture, Tinajero’s crochet disks are just one example of her brand of eco-art, a process that magically refashions disposable rejects like old foam flooring and used make-up removal pads into something new and unexpected that speaks not only against waste and for creativity but also to something more profound. This depth is revealed in collaborative works like "Carry On: Homeless Project" and "Urban Corridor," which foreground social themes such as homelessness, a state of living in which ad-hoc solutions—not unlike the ones Tinajero puts to use in her own sculptural practice—reveal a resourcefulness sorely lacking at the more comfortable levels of social existence.