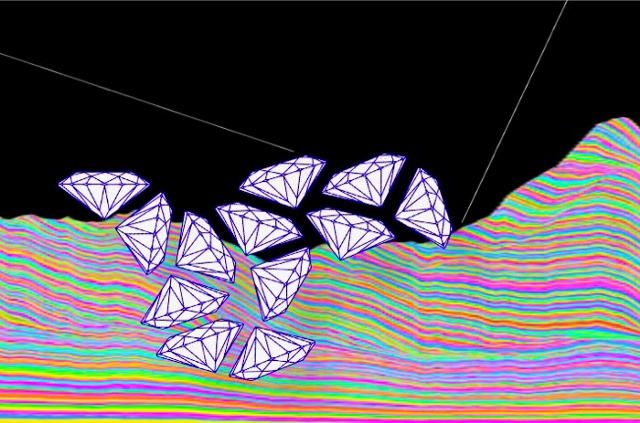 Never much of a video game player, I nevertheless want to shoot up the flying rhinestones of Cindy Latham’s animation, "We Traveled So Far." Self-possessed and endlessly multiplying, they travel the world in search, presumably, of consumers to take down. Much like the global trade in gems, among other goods, they crisscross the ocean with ease, finding their way into the suburban American home. Pointing up the ills of consumption is no small feat, and Latham has chosen to do it with a tricky, difficult bag of tools, among them abstracted I-Beams, grids, and other geometric forms that connote construction booms and raw materials. Sometimes these are drawn, sometimes animated into alternately obscure or more direct scenarios. Hitting one over the head with an anti-consumerist message just won’t do, as Latham clearly senses; but it remains to be seen if her more distanced, graphic tactics can succeed where didacticism is sure to fail.