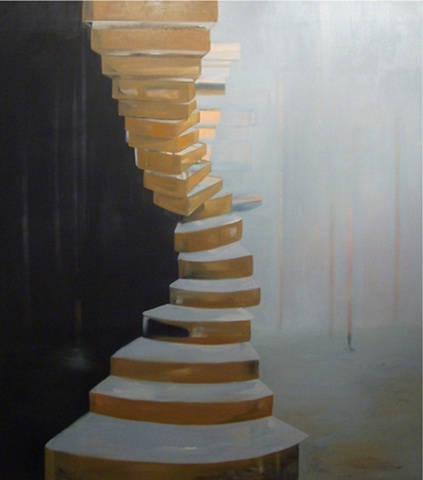 Abstraction and architecture share a long and fine history within modernist painting. Artists as diverse as Mondrian and El Lissitzky used geometrical images to connote spaces of utopian perfection, a kind of space that can only exist in the imaginative plane of the picture. It’s a space that Lakesha Moore builds in her large-scale canvases, employing a washed-out system of grids and arcs that suggest not so much an area for stepping into but rather an ideal, light-filled one in which the mind and the eye have room to expand. In keeping with the modernist tradition, then, her paintings imagine not fantasy places for real bodies but rather extraordinary ones for mental sitting and wandering. Big enough to walk into but bereft of painted figures, they don’t so much invite the viewer in physically as psychologically, to take an expansive trip up twisting, precarious staircases and underneath domed latticework.