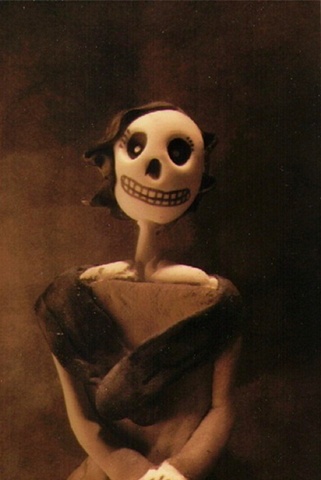 If Tim Burton were Mexican and a lover of portraiture, he might have created something like the strange pictures that Bran Rogers configures out of media as disparate as watercolor, clay, and digital photography. Which is to say that Bran Rogers is doing something utterly peculiar and charming, creating intimate portraits of Hallowe’en and Day of the Dead figurines that he himself fashions by hand out of two- and three-dimensional media. These dress-up witches, caped vampires, and carefully turned-out skeletons pose against backgrounds that fall somewhere between old-fashioned ornamental wallpaper and out-of-sync, off-scale decorative motifs. Each of his characters suggests a story, practically begs for a larger narrative in which to encounter other creatures like themselves—without one, their loneliness is palpable, sweet, and just a little bit heartbreaking.