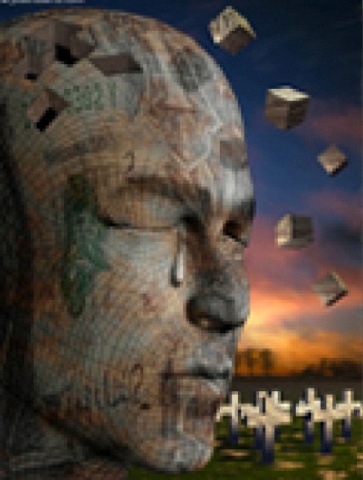 The trick of much Surrealist painting lies in the believability of its what-if-ness, the undeniable realism of the impossible scenarios proposed by artist on canvas. It’s a strategy marshaled whole-heartedly by Jose Roberto, who in his digital paintings freely samples situations and spaces from the likes of Magritte, Dalí, and de Chirico, as well as the decidedly un-surrealist Edward Hopper. Roberto’s allegorical themes, however, stray as far from the psychoanalytic as can be, suggesting not the traps of repressed desire and early experience but rather those of fate. Hence the overbearing hands that control the street figures of "The Puppet Master," the guiding narrative of "Paradise Lost," the godly sculptor of "Killing Me Softly," the murderous giant scissors of "We Have to Talk," the imprisoning bars of "Forbidden Love." For all his trafficking in destiny, however, Roberto’s scenes also ask their own kind of what-if question, but one that instead interrogates the reality of painting, proposing that a ball might be thrown through the depicted window or that the lights might be turned off the pictured sky, thereby meshing the hand of fate and that of the artist.