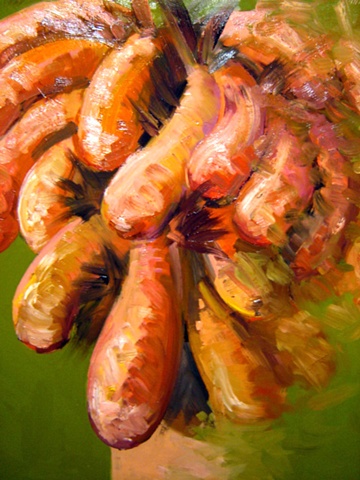 If Philip Guston were a woman, he might have made paintings something like Rachel Clark’s. This is something that Clark herself is clearly aware of, as her painting "Philip Guston Balls" makes clear. And if the balls in this thick, sticky painting look more like a fleshy T-Bone than male genitalia—which is not to say they don’t also look like male genitalia—the rather unappetizing resemblance is one that finds parallels across her larger body of work. Clark is something of a dirty chef when it comes to cooking up paintings: sausages and fufu feature in the titles of works that otherwise suggest hairy phalluses, snaking intestines, rainbow poop, swarthy buttocks, and so on and so forth. The whole is accomplished with a colorful, loose, comic intensity that belies the paintings’ thoroughly scatological subject matter, as if an eminently charming young woman, knowing full well what she was doing, suddenly turned around and told the most vulgar of jokes.