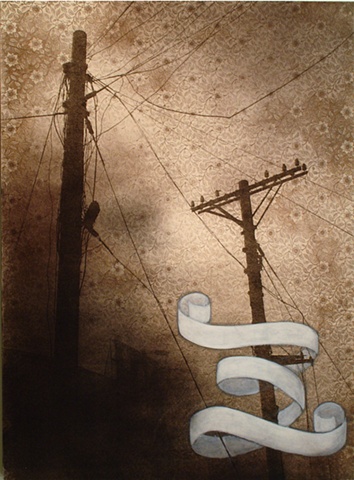 To fit two years of one’s life into a bound journal takes a feat of condensation, either of content or of scale. Between 2004 and 2006, Lee Marchalonis appears to have lived a life of intense travel, experience, and observation, and if she has edited a word of it out of her written account of this time I don’t know where it has gone, for Marchalonis is a goddess of the fine-tipped pen, able to compose text at a mind-boggling scale of thousands of words per page, just as monks do on a grain of rice—or at least so it seems. Interspersed amid the words of her diary are hand-drawn scrolls that bear mottos rich in humor, self-deprecation, and the quirkiness of language. “Maybe today I’ll get hit by a bus” reads one. “Pretty good but not the best” says another. Curiously, when these banners find their way into Marchalonis’s series of crisply moody prints of birds on a telephone wire, they grow speechless, spooling empty ripples of white ribbon across the sunset sky, as if in defiance of the need to declare anything specific at all, at least not then, not there, not when the sky casts such a stunning glow, the wires such a magical shadow, the birds such a fantastical sight.