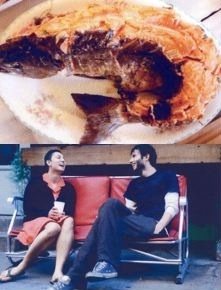 A displaced Czech living in New York, Petra Valentova is particularly aware of the distances that separate people from their native land and culture, and the desires that slip in between those geographic gaps. Rather than looking for a fellow Czech in her new city, Valentova made the seemingly obscure choice to look for a Sami—an indigenous inhabitant of Norway—a process she aptly relates to looking for a needle in a haystack. The men who responded to her internet advert were on the whole not remotely of Sami descent, but Valentova nevertheless went out with them, asking in return that they share a recipe with her. The resulting cookbook is a surreal one, full of recipes no Norwegian would ever make—or perhaps they would, in our global world. How else to explain a cropped-hair Czech artist living in the United States searching for her soul mate among a race of people numbering under 100,000?