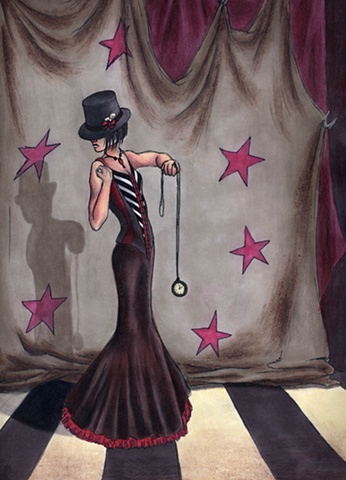 Female bodies abound in Kristin Costa’s book of fragmented images and notes to self and others. A pigtailed blonde vixen with a lithe body reappears in whole and in part, as does a similarly attractive, big-eyed, raven-haired woman. Pictures of cupcakes and artichokes, a paper chopstick wrapper, and images of a swank county fair draw strange conclusions in a body of work dubbed by the artist as “autobiography through iconography.” Perhaps that explains the absence of male figures. A rare finished work displays Costa’s illustrational style, part velvet cabaret, part cartoon. Subtle clues lurk in the details: barbed hooks hold up starry curtains, a dangling pocket watch has hands of the same length, two playing cards poke out of the girl’s costume hat. Her shadow is the shadow of a dwarf, facing the other way.