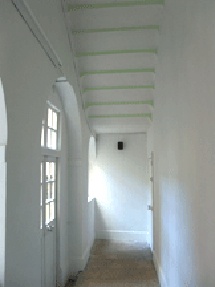 What does sound look like? If some noises—water rushing, trains rolling, birds chirping—bring predictable associations, the experiment of China Blue’s “Mikey vs. Fabio” adds a welcome geometric abstraction to the mix. In a room filled with the sounds of a ping pong game (played presumably by the Mikey and Fabio of the title), the viewer is surprised to see not a table tennis game in progress but rather a three-part painting diagramming the movement of the ball throughout the recorded match. The sounds takes place in time while the painting freezes it, collapsing an audibly interminable set into one flat space. Which medium best captures the spirit of the game? If you can describe the sound of one hand clapping, I’ll tell you the answer.