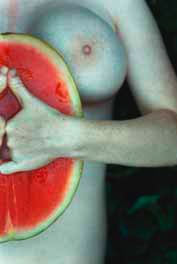 Big and fleshy, April Henry’s “Empathic Pulping” and “Untitled” zero their sharp lens right into the chests of two very different bodies. One frames half a naked female torso, an open red watermelon centered beneath her breasts, held in place by fists of fingers dug into juicy flesh, as if into the flesh of the body itself, about to pull back rib cages to expose the organs inside. The other photo sticks more to the surface of things, focusing in on the curlicues that run down the center of hairy male bodies. At once a study of natural patterns and an off-putting instance of getting too close, the hair pools into nasty swirls at the bottom left, a damp spot best explained by the watermelon in the next picture over—a rationale that evaporates quickly if the pictures are separated.