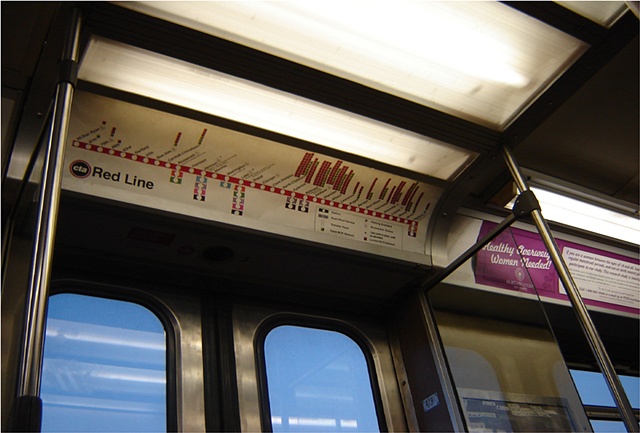 Amanda Wasielewski is an intrepid explorer of new materials and spaces. In a series of works she repurposes wireless networks as both medium and site, manipulating the digital ether both poetically and politically. "Chicago Wireless ‘L’" presents new maps of the city’s elevated train system such that the availability of closed and open computer networks are accounted for. The north-south disparity readable along the Red Line falls expectedly along known socio-economic lines, confirming expected links between economic situation and Internet access. That doesn’t make the results any less important, however: we tend to ignore facts that aren’t laid out graphically and prominently enough. To tackle the “prominent” end of that equation, Wasielewski used guerilla tactics to install her maps in “El” trains in place of official maps, where they must have surprised any commuters who actually bothered to check a map they know by heart. In a separate work, “Invisible Poetry,” Wasielewski again reworked wireless networks to new ends, this time using the space of wi-fi names as a site. A letter sent to neighbors requested that they change their network names to the lines of a William Carlos Williams poem. Whether they did or didn’t isn’t quite the point—the work succeeds by alerting people to the potential of a new site in which to write poetry. Let them then use words of their own choosing, not just Wasielewski’s.