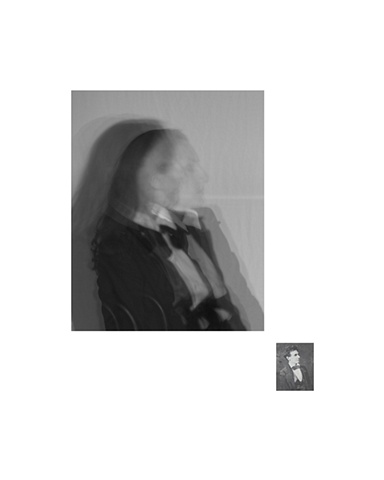 In her research on the visual image of Abraham Lincoln, scholar-artist Julia Marsh explores how the American president’s concern with his own mediated appearance was implicated in his political success. The series "Approximating A. Lincoln" finds her doubling back on this research in a way that implicates her own person: by photographing herself in the pose and dress of various Lincoln portraits, she makes tangible the identification that scholars often experience with their subjects but rarely admit. The layered, distanced aspect of this identification finds visual metaphor in the blurry layered quality of Marsh’s self-portraits-as-Lincoln, a quality whose technical explanation is that they are composed of dozens of photos laid one atop the other, each of them yet another failed attempt to achieve Lincoln’s impression. It’s a metaphor that speaks eloquently of historical research in and of itself, of how the historian is always trying to recreate for herself a vivid, clear impression of the character or situation that is her object of study, and how elusive that focus can be.