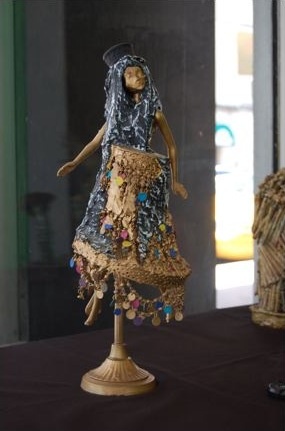 As if risen from the bed of a local creek, E. (Jo) Johennning’s doll sculptures stand as princesses of sludge: regal, elegant and barnacled, the result not of years of aristocratic inbreeding but, seemingly, years of sediment buildup and litter accumulation. The result looks nothing like the dolls’ genetic and material make-up would suggest—tuna and sardine cans become thrones, broken necklaces and copper scrubbers morph into fashionable gowns, a Crown Royal bottle cap turns, on the stroke of midnight, into a chic chapeau. And Barbie, the prototypical plastic doll who lurks at the core of these creatures, underneath their newfound layers of caked on paint and scrap accessories, proves herself finally to be a woman not of the repressive 1950s but something simultaneously ancient and contemporary.

Johenning’s bottle cap figures, strung into stereotypical Texas figurines, lack the transformative magic and feminist surprise of her dolls. A cactus or cowboy made of steel beer tops may technically provide a transmutation from one medium to another, but isn’t it one that suggests more the cliché of the hard-drinking Texan than anything unexpected—as unexpected, say, as a beautiful woman risen, like a Phoenix, from junk?