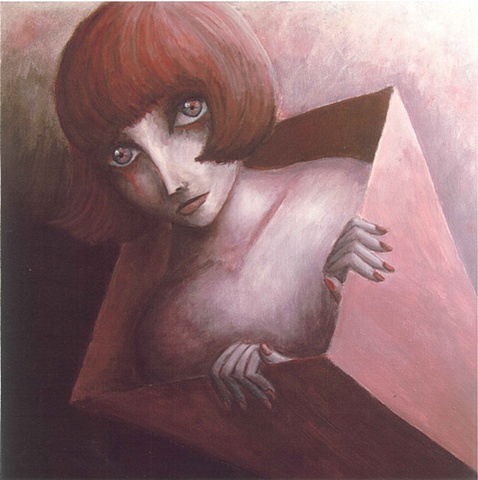 Hewing to conventions of beauty most often found in animé films, manga cartoons and china doll shops, David de Lara constructs portraits of young women with large eyes, perky small noses, plump limps, and narrow little chins. Since a portrait is traditionally meant to encapsulate the personality of the sitter, it seems reasonable to wonder what it is exactly that makes these ladies tick. Granted, they’re as fictional as they come, but that’s all the more reason to look to their pictures for answers (after all, there’s no flesh-and-blood girl to ask). Where exactly to look? Accessories, expression, and color palette are all traditional markers of historical portraiture, and they’re here too. In the first category are the ornaments of light bondage: chokers, a cardboard box as home, laces that string their way across shoulders, neck, and arm. In the second, faces alternately full of wide-eyed innocence, mild apprehension or even fear, and a sort of come-hither knowingness. In the third, the gothic tones of black, white and blood red, sometimes mixed to an earthy ochre, for what might be called “organic” gothic. What does it all add up to? Ignoring the urge to psychoanalyze the artist himself, one might instead apply the analysis to a culture that produces as its fantasy images women whose natural state seems to be one of loss, need and damaged fragility. One might then ask: How is this a picture of women today? And how might it be fixed?