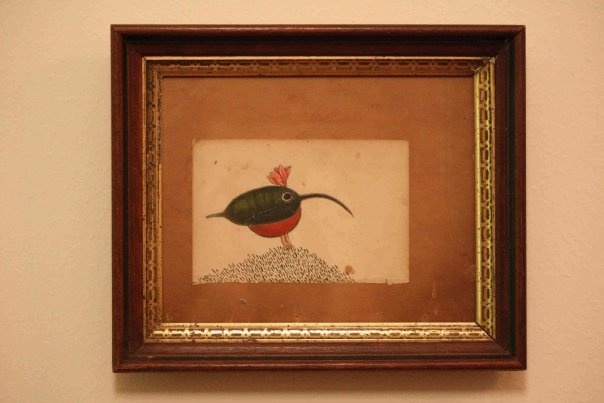 The conventions of two-dimensional artwork fall wondrously apart in Dan Barry’s collages. Not so much because of the newness of his imagery—it consists mostly in figurative collage, plenty charming but in a way done brilliantly in the 1920s by Hannah Höch, though always worth doing more of—but rather his presentational technique. Barry presents his work in frames, nothing unconventional about that, but he uses both sides of the frame, offering a second collage on the backside, providing a sort of underbelly to the primary work, revealing what normally is hidden, left out, or covered over. If these rarely seem as thoughtful and meticulous as the deft collages that grace the “right” side of his frames—constructed pictures of monstrous yet empathetic creatures, birds of strange origin, and more—so be it. The “B” side usually is, but woe the day record companies did away with it. Makers, along with the rest us, rarely get it all perfectly into a single image, phrase, or gesture—how much more human and real to include the rest of the picture. But how to get people to look at the “wrong” side of the frame? We’re all far too well trained to be lifting pictures off the wall and turning them around. Instead, then, Barry has ingeniously decided to offer his work not hung but rather wrapped, tucked inside of delicate, handmade cloth bags, their found and worn fabrics in keeping with the weathered quality of the collages themselves. The result is a holistic package that viewers must choose to unveil, handle and contemplate, slowly and intimately.