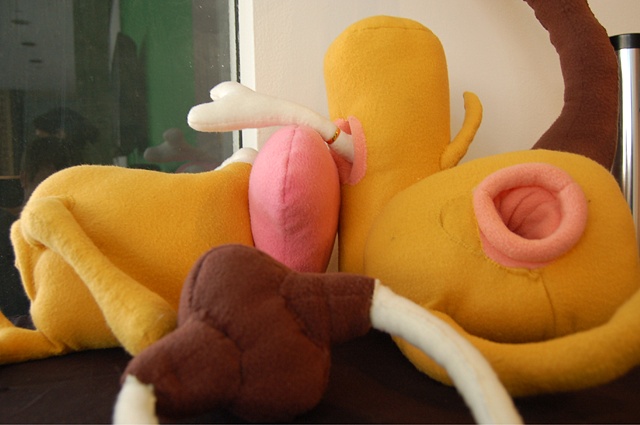 If Dr. Seuss were alive and well and making work that, instead of being illustrated children’s narratives, consisted of hand-sewn fleece plushies that acknowledged the realities of industrial farming, the human perversion known as scatology, the trend toward interactivity, and the postmodern theories of Gilles Deleuze and Feliz Guattari (in particular, their notion of the body without organs), he might produce something that looked remarkably like the creations of Alison Kuo. But no need for all that—Alison Kuo is alive and well, and inventively sewing and stuffing away at enough simultaneously cuddly cute and monstrously bizarre creatures to fulfill the psychological needs that most of us refuse to admit we have. Well, perhaps not quite enough (there’s a lot of need out there), but with the runaway commercial success of Uglydolls, which went from being hand-stitched by their creator to being mass-produced in China, Kuo is sure to find a taker, and soon, who can help to produce these uncomfortably appealing beasties for the masses.