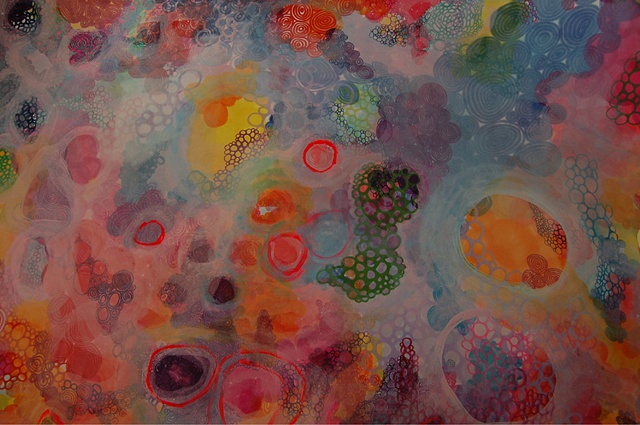 Normally color and form don’t get me excited, but something about Sarah Stevens’s “Oh there you are, my dear,” a large-scale work on paper, has me wanting to wax poetic and silly, drippy and desirous, about fluorescent orange, sunshine yellow, moss green and hot pink, not to mention concentric circles and spherical clusters. Why? What is it about this particular mess of endlessly confectionary tones and organic shapes? Perhaps that, for a dense, all-over work that relies more or less on just two forms, Stevens’s drawing feels not obsessive but passionate, driven not by a compulsion to repeat and repeat and repeat, ad infinitum, but rather to indulge in the pleasures inherent (apparently—who knew?) in the shapes and colors she’s chosen. Perhaps also because she’s remarkably adept at creating depth through layering and washes, theme and variation. Maybe, too, it’s the tension she’s created between cheerfully artificial colors and ancient, organic designs. I’ll admit, I even peaked underneath the skirt, so to speak, of her drawing, catching a glimpse of its hidden backside, where only a few colors and patterns show through the thickness of good paper, cloud-like and faded, the fossilized remains of something magical that happened on its other side, long ago.