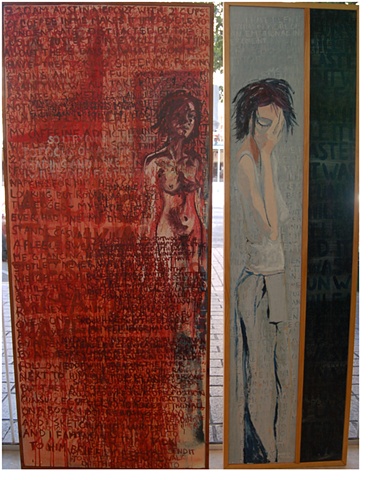 What kind of urge is it to want to read someone else’s diary entries? What kind of urge is it to want someone to read yours? Both of these uncomfortable yet not unfamiliar desires lurk amid the passionate, insistent mark-making of Andrea Nelson’s paintings, where figures and words, mute dashes and letters combine to form the grid and flow of the personal and private made unabashedly public. “Distraction” and “Big Deal, No Big Deal,” two paintings as tall and narrow as a person, layer tender and washy full-body portraits of a woman—self-portraits, one imagines—with sexually rich poetry of varying legibility. The first presents the woman nude, in shades of red and orange, as hot and open as the words that cover the canvas; the second depicts her clothed, in tones of blue, cool and thinking, trying for composure. Nelson’s other paintings are far less explicit, more conceptual in their rendering of non-pictorial elements. Thus the words in the diptych “Cause No. D-1-GN-07-001471: Temporary Restraining Order” and “Defendant’s Response to Interrogatories” are borrowed from a pair of painful and deeply personal legal documents and render them, almost meditatively, in grids of letter overtop letter, eventually silencing their complaints in illegibility. Which strategy works best? Tell all or hide all in the telling? Perhaps it depends entirely on the goal, be it meditation or exorcism, advertisement or revelation.