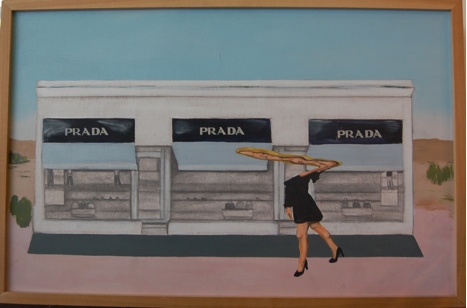 Holbein’s “The Ambassadors” is generally considered to be the most famous anamorphic painting in art history. Painted in 1533, it depicts two regal, proud, and richly dressed royal figures, but the image is interrupted by a strange black-and-white shape that floats near the bottom of the picture plane. See the picture from a sideways glance, and the floating blob turns into a skull. That a symbol of vanitas is present in the picture is of some interest, but what’s truly fascinating about this painting is how it breaks the viewer’s vision, refusing to allow a single image, from a single point of view, to stand for reality. Something of this historical strategy finds a remarkably contemporary foothold in Chris Holloway’s series “Distorted People,” where the artist depicts celebrity figures at play in their natural settings, their heads morphed as if in a funhouse mirror. Witness Jessica Simpson shopping at a Prada store (okay, it looks like the Prada store that some artists built in the Marfa desert as a hoax, but still), her svelte body slick in a little black dress and heels, her pretty head stretched as if it were made of Silly Putty. (As well it might be.) Just as Holbein, some five hundred years ago, questioned whether a painted picture could tell an entire story, so Holloway today questions whether the images that make up our celebrity culture ever tell any kind of truth at all.