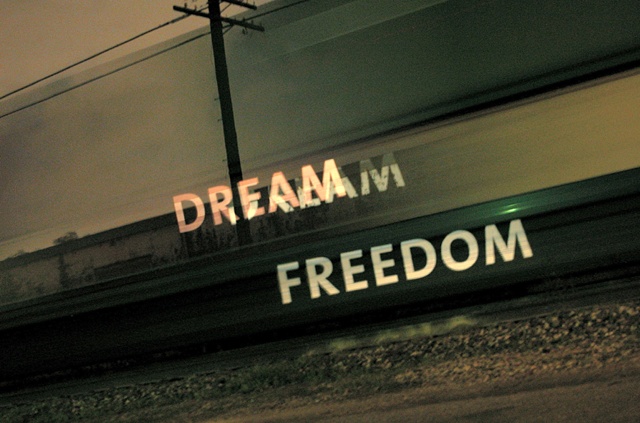 Glowing words populate our lives—they shout off of billboards, bus shelter, building facades, and every other surface that advertisers can get their hands on. But words on their own have much less stable meanings than their place in these campaigns ever suggest. Sometimes the cooptation is enough for a wordsmith (or an anti-consumer activist) to dream of tearing those letters off their neon frameworks and setting them free, to fly off into a universe of signifiers. Pablo Gimenez Zapiola has done something just like that. The artist projects words against passing trains, capturing the poetic effect in a series of photographs titled “Meaning in Motion.” Thus DREAM and FREEDOM hover luminously in space, the train on which they’re projected moving so fast it virtually disappears under the camera’s quick shutter speed, the words given all the space they deserve, the effect tempered by a telephone pole that seems to plunge right through DREAM. And HARMONY and FEAR appear together, offering relief in the solidity of the former and the dissipation of the latter. Gimenez Zapiola isn’t pretending to don the cap of poet—none of his chosen words, alone or in pairs, would have much of an effect on their own—but rather that of collageist, a maker of meaning through juxtaposition, and the freezing of motion.