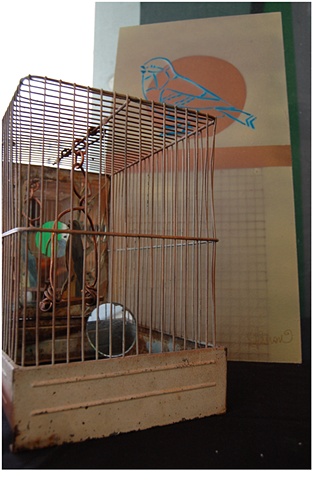 Erwin Schrödinger, an Austrian physicist who founded the study of wave mechanics and won the Nobel Prize in 1933, has more recently given his name to a series of studies by artist Suza Kanon. “Schrödinger’s Birdcages” is inspired by the physicist’s questioning of how objects change in relation to their observation. In translating this relativist notion into sculptural and painterly media, Kanon has taken a route that looks wonderfully like Joseph Cornell’s—she has put paper birds into open cages, along with bits of mirror. Of course, Cornell’s purpose was nothing like Kanon’s, or Schrödinger’s for that matter—he was after a more idiosyncratic revelation of the extraordinary, and his odd juxtapositions continue to attract marveling today. But Kanon’s tactic, meant to reveal how reality changes depending on the position of the observer—the birds seem alive from certain angles, depending on how they are caught in the dangling mirrors—also reveals something unexpected: the birds’ point of view. Because, although Kanon suggests that the birds stay in their cages so that we may better observe them, another way of looking at the situation is to imagine that the birds are so confused by the alternative realities reflected in the mirrors that they don’t know what’s free and what’s locked up. They might also be fooled by the paintings Kanon has paired with each cage, which show the birds floating free, up above any wire mesh. Maybe the birds believe what they see, and think they’re already free. We live in a world of images, after all.