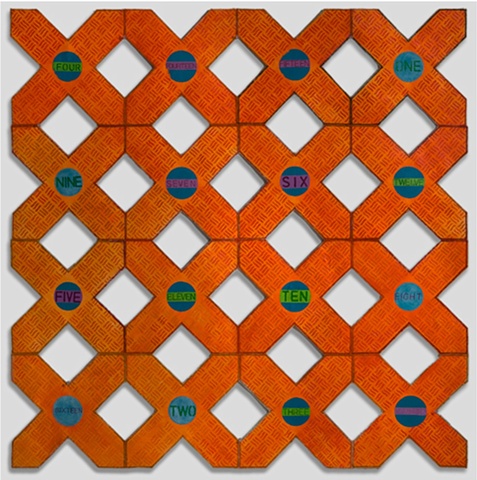 How rational is our world really? Can natural phenomena truly be accounted for through ones, twos and threes, through triangles, x’s and o’s? Artist Linda Wellner believes it can, and she has made a practice of creating drawings, sewn paintings and photocollages that focus on this notion. It’s an idea with a long and multicultural history, involving the kind of Islamic patterning found in the Al Hambra and the theories of Western philosophers like Pascal. How Wellner tackles these lofty notions, however, is decidedly down to earth, even naïve, involving simple pattern and decoration, as well as a technique that most closely resembles the traditional women’s art of quilting. All of it reveals a fascination and belief in the truth of rational systems and their ability to say what matters about the cosmos. Whether Wellner is able to convince the viewer is another story, however, and perhaps even beside the point. The complex theories behind her work are not explicated by the work, only visually enshrined by it. The feminist twist is in having accomplished that through such accessible and modest means, rather than the marble and concrete that the great philosophers are accustomed to. The irony of it, though, is how often women’s concerns were left out of such philosophies.